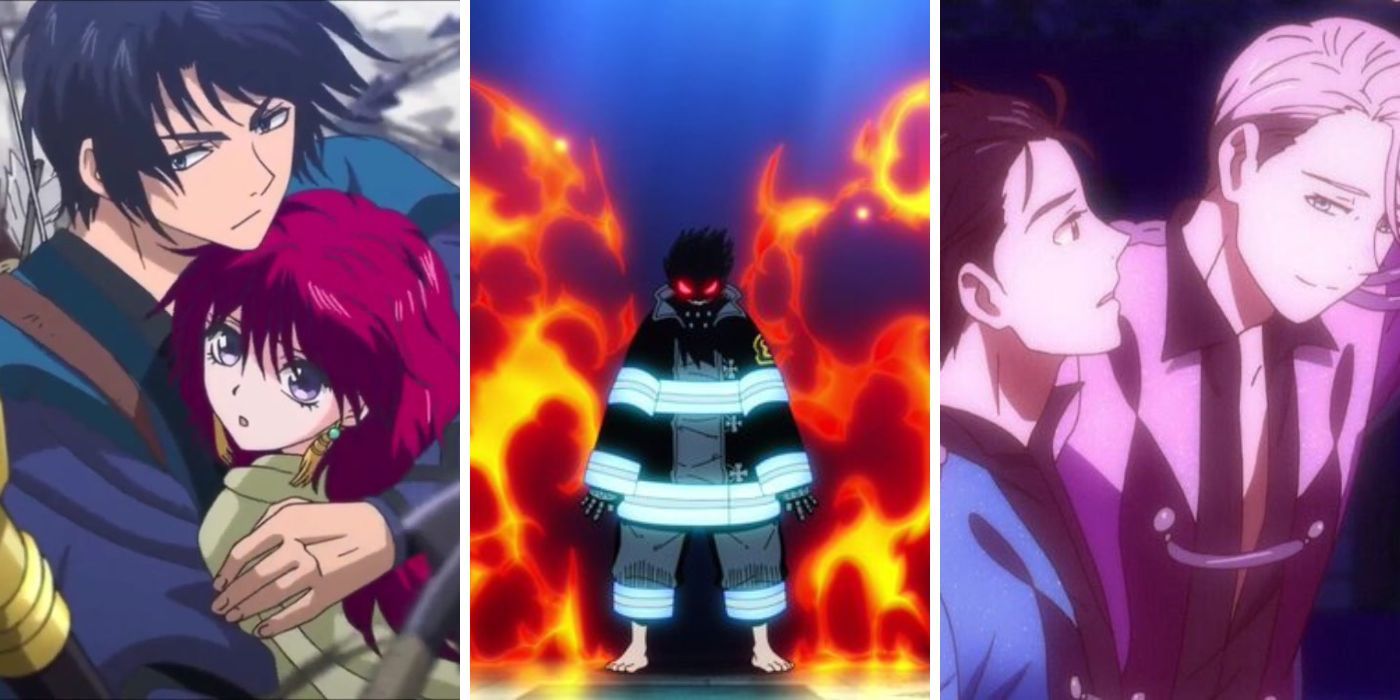 Countless anime feature incredibly strong characters who are either inherently athletic or work hard to gain their skills. These characters inspire anime fans to get in shape themselves. While some characters use their strength in conjunction with magic, others compete on their own merit. Regardless, these anime characters spur audiences to work out.

RELATED: Top 10 Anime That Inspire Us To Learn

One scene often spotted in anime is the protagonist struggling to find their footing with new or existing powers. However, they always seem to come out on top in the end. Whether it’s magic or a sport, many fans are touched by the tenacity and gains these anime characters make.

10 Fire Force Teaches Us To Keep Improving Our Skills

Fire Force centers on a company of fire soldiers looking to find the source of the spontaneous human combustions that have been occurring. As one of the newest Fire Soldiers, Shinra Kusakabe is particularly invested in doing well. He often spars with his comrades and is always looking to improve his skills as a Third Generation Pyrokinetic. Shinra is usually joined by the other newcomer, Arthur Boyle.

Watching the two young men coming into their own as Fire Soldiers is enough to make any anime fan want to be better. The work and dedication they put in – especially Shinra, is inspiring to watch as their skills continue to improve. Plus, with Commander Obi’s personalized gym, fans can easily get into the workout spirit.

9 Attack On Titan Makes Us Want To Fly Around

Becoming a soldier in any capacity is hard work. Yet, it is especially difficult when the soldiers are training to fight man-eating Titans. Still, Eren Yeager and his friends work tirelessly to become the best soldiers they can in Attack on Titan.

RELATED: 10 Most Villainous Heroes In Anime

As the recruits train to become part of the Paradis Military, many fans attest to wanting to improve their own fitness. Seeing the recruits and scouts flying through the air in ODM gear made many fans want to be strong enough to join them. Watching the characters in Attack on Titan achieve their goals makes fans feel like they can do the same.

8 Demon Slayer Inspires Us To Keep Getting Stronger

Tanjiro Kamado’s journey from living a quiet life on a mountain to becoming a combat specialist is moving. Any Demon Slayer fan feels compelled to work out after witnessing Tanjiro’s various training montages and epic battles. Though they still may be unable to split a boulder, audiences everywhere are hitting the gym to have even a fraction of Tanjiro’s gains.

Tanjiro is not the only strong character to motivate fans. Characters like Zenitsu Agatsuma, Inosuke Hashibira, and even Tanjiro’s sister Nezuko, all have overpowered moments that encourage fans to exercise. No matter where the inspiration comes from, any fan watching Demon Slayer is bound to aspire to Hashira-level athleticism.

One of the best things about Fullmetal Alchemist: Brotherhood, is that anyone can become an alchemist. Likewise, anyone can become fit if they work at it. With the show full of athletic characters who all have great power, it is no wonder that fans are motivated to work out.

Edward and Alphonse Elric and Izumi Curtis are prime examples of using hard work to become masters of their craft. The three of them endured harsh conditions to become the amazing alchemists and fighters they are today. Whichever character inspires fans, there is assuredly a correlation between Fullmetal Alchemist: Brotherhood and the desire to work out.

Jujutsu Kaisen depicts a scrappy protagonist learning a new skill. Fans watch in a mixture of awe and amusement as Yuji Itadori struggles through unconventional training methods to sharpen his body and mind. However, many fans can only dream of watching Lord of the Rings as part of their training.

In any case, many audience members following Yuji’s story love his persistence in every situation. His unbridled stubbornness and eagerness to learn help fans feel like they can achieve their goals too. It is no wonder that many viewers feel inspired to become fit after watching Yuji and his friends.

5 Free! Encourages Us To Keep Trying

Watching the Iwatobi Swim Club is enough to make any fan want to work hard. The way the boys of Free! rally around each other to reach their individual goals is both inspiring and moving. Rei Ryugazaki is especially compelling as he did not even know how to swim when he joined the club. Yet, he becomes proficient enough to compete in a short amount of time.

Despite their talent, all the boys struggle when it comes to their swimming. Plus, each of them wants to help advance the team – especially when it comes to the team swim. Watching the Swim Club work through their apprehension to come out on top propels anyone to revisit their fitness goals.

When Princess Yona leaves her kingdom for the first time, she realizes she has few life skills. This becomes even more evident when she is captured by a sleazy prince who wants to marry her. After this, Yona becomes fed up with her inadequacy and vows to be more self-sufficient in the future.

Yona of the Dawn is an inspiring tale, as Yona develops into a courageous warrior. The late-night hours she spends shooting arrows into tree trunks until she blisters are enough to spur any fan to action themselves. Yona of the Dawn is a compelling tale of a young woman who knows it is never too late to want to improve.

After being crushed and disillusioned by the pressure of his prestigious middle school, Yuugo Hachiken attends Yezo Agricultural High School for a change of pace. As someone who grew up in the city, Hachiken does not have the first clue about farming. Yet through a lot of hard work and personal struggle, Hachiken comes to appreciate his time on the farm.

Silver Spoon speaks to so many people, because of its relatable story. Many viewers also feel discouraged by their current life and search for a change. Many find that change in exercise. Like Hachiken, fans are inspired to work harder to help themselves gain confidence in their own abilities again.

2 My Hero Academia Shows That There Is Hope For Anyone

Izuku Midoriya wanted to become a hero so badly that he seemed to wish his goal into existence. In My Hero Academia, Midoriya gains a Quirk from his idol, All Might, and the two train together to help Midoriya reach his fullest potential. Fans everywhere are inspired to work as hard as Midoriya did to get into the school of his dreams.

RELATED: 10 Anime Characters Who Are Famous In Their Own Universes

Even after he is accepted, Midoriya knows there is no time to slack off. Midoriya continues to train as hard and long as he can to eventually become the next Number One Hero. Viewers are moved by Midoriya’s story, as he started as a scrawny middle school student and eventually became the talented hero he is today.

1 Yuri!!! On Ice Displays The Power of Support

Yuri Katsuki’s skating career is an overall uplifting story. Though he was initially going to quit, the help he received from his idol and coach, and his friends and family, motivated Yuri to keep skating. While many were disappointed he did not get gold, Yuri takes it as an opportunity to skate even more to finally claim victory.

Yuri’s tale inspires many fans to overcome their setbacks. Additionally, Yuri!!! On Ice teaches an important lesson on the power of support systems. Whether it is skating or exercising, having a group of friends or family to help fans get back into their workout routines is an invaluable tool. After watching the show fans were compelled to revitalize their own exercise goals to realize their dreams – just like Yuri.

NEXT: Top 10 Anime That Inspire Us To Exercise