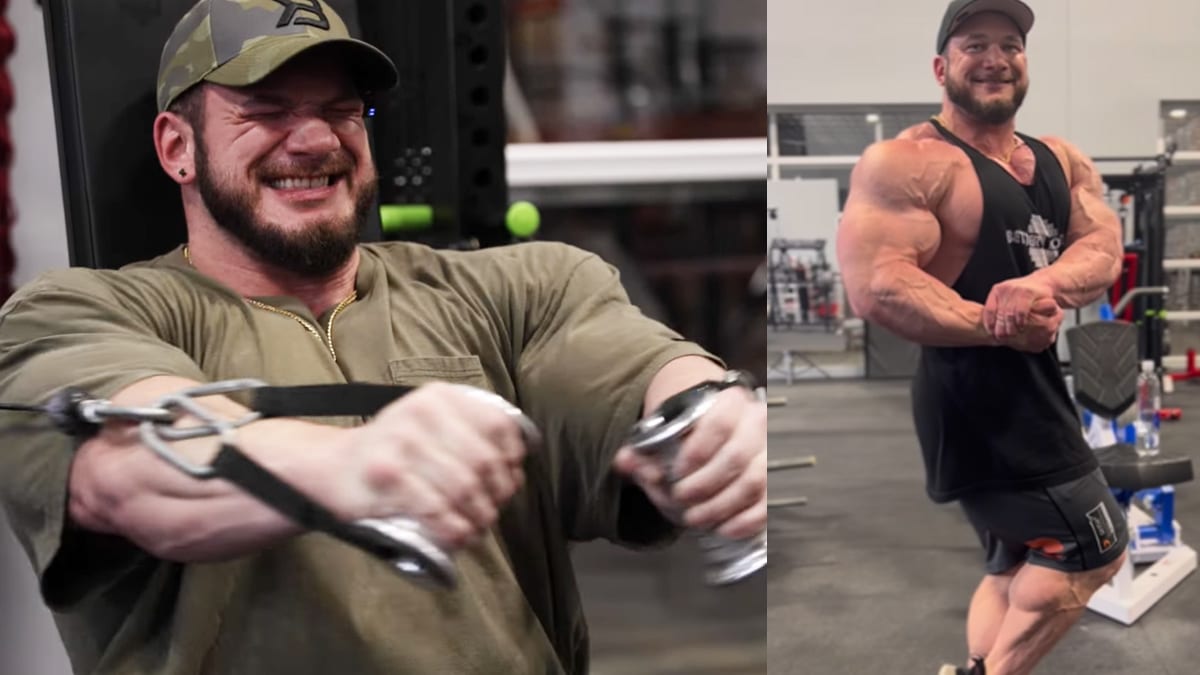 Hunter Labrada is dominating the off-season with his new eight-week split. Using the new routine, he’s gaining mass, which will help him tremendously once he begins preparation for the 2022 Olympia.

Labrada won the 2020 Tampa Pro before making his Olympia debut the same year. He secured a humble eighth position at the 2020 Olympia. With his improved physique, Labrada came out of the gate with a phenomenal performance, placing higher than Nick Walker, who landed fifth on the scorecard at 2021 Olympia.

It is widely believed that Hunter and Nick started a rivalry following their close Olympia contest last year.  It is Walker’s belief that his physique at last year’s Olympia was ‘more complete‘ than Hunter’s. Aside from pushing each other in and out of competition, both IFBB Pros aim for next-level performance at this year’s Olympia.

Hunter is determined to surpass his performance from last year with his outstanding conditioning and symmetrical build.

His goal now is to bring a new physique to Olympia in 2022 to defeat reigning champion Mamdouh “Big Ramy” Elssbiay and capture the gold medal.

On July 28, 2022, the bodybuilder demonstrated a “Push A” routine from the eight-week split on his YouTube channel. He explained each exercise in detail to ensure everyone understands his point of view for picking the exercise.

“Biggest things with the cable fly, you want to think about getting your bicep to your pecs. It’s the biggest mistake people make on flies whether with a dumbbell, on a pec dec, or cables is they will let their chest concave to do this. This is not a full chest contraction. Shoulders retracted, big chest, biceps to pecs, the full chest contraction. As far as cable neigh goes, you want to have the cable set at a height where the cable is running right through the shoulder, elbow, and into the wrist. Then, as far as range of motion goes, you want to get that upper arm, your humerus to 90-degrees, relative from starting position.”

“At the top of the rep there is some protraction that is needed for a full contraction of your chest. While I do believe in having scapular control, they do need to be able to move when you’re exercising.”

The bodybuilder moved on to prime incline chest press, but suggested that anyone who doesn’t have access to one can try reverse band smith press as an alternative.

“They [yoga blocks] are absolutely wonderful for sticking under machines to drastically reduce the range of motion for your first rep. So, you can kind of sit in there without someone to hand it to you or you’re getting way out of your actual range of motion and hurting something. They’re super light weight. You don’t have to ruin plates or dumbbells or the floor.”

His third set was a mechanical drop set.

“It’s a really great way to finish off incline pressing and that is, we’re going to start with the weight done on the two pin which means it’s going to overload the top portion of exercise and the chest is shortest or most disadvantaged, where it’s weakest. Then, once we completely reach failure there, we’re going to take the two plates and put them to the top pin, which on this machine, overloads the bottom portion of the exercise so where we’re still fresh, be able to get some more reps in.”

While the prime shoulder press is one of Hunter’s favorites, he suggests the unilateral hammer as an alternative.

“Same premise on the third set here on the incline press. Going to burn out in the shortened position, top half-ish and change the weight peg to the heaviest bottom and bottom half to get some extra reps.”

Hunter Labrada moved on to the second shoulder exercise of the routine.

“It’s my favorite way to stimulate or isolate the medial delts. You’ll see cables run directly down the back of the arm, proper alignment all the way through. Working in the scapular plane. Perfectly braced chest into there [incline bench], doesn’t have any ability to go like that [sway back and forth] and because we’re using cables, there’s no dead spot at the bottom. It’s actually peak resistance at the bottom. There’s a pretty significant drop-off due to that angle.”

Hunter Labrada explained a metabolic set: “doing as much work as possible in as little of time as possible with the intent to cause as much blood flow and failure and just pain as possible.”

Here’s why he picked those exercises: “Very much taxing to the triceps and chest with the two variations of the push up. Obviously, finishing with the lateral really hammering the delts. So, really touching on everything we trained with that little circuit.”

In Labrada’s explanation, he showed how to set up the resistance band for the push-up: “take band, have them in thumb. Spin band one time so there is a cross in said band on your thumb. Behind your back, underneath your rear delt, around your shoulder. So, you can press.”

You can watch the video here

Currently, Hunter Labrada is using an eight-week split routine to add muscle mass and become bigger before he alters the routine for 2022 Olympia prep.

If his current split works in his favor and allows him to achieve the physique he wants, Labrada might not completely modify it.

In approximately five months, Hunter can possibly take the best and heaviest package to Mr. Olympia 2022 due to the well-balanced approach he takes to building size.