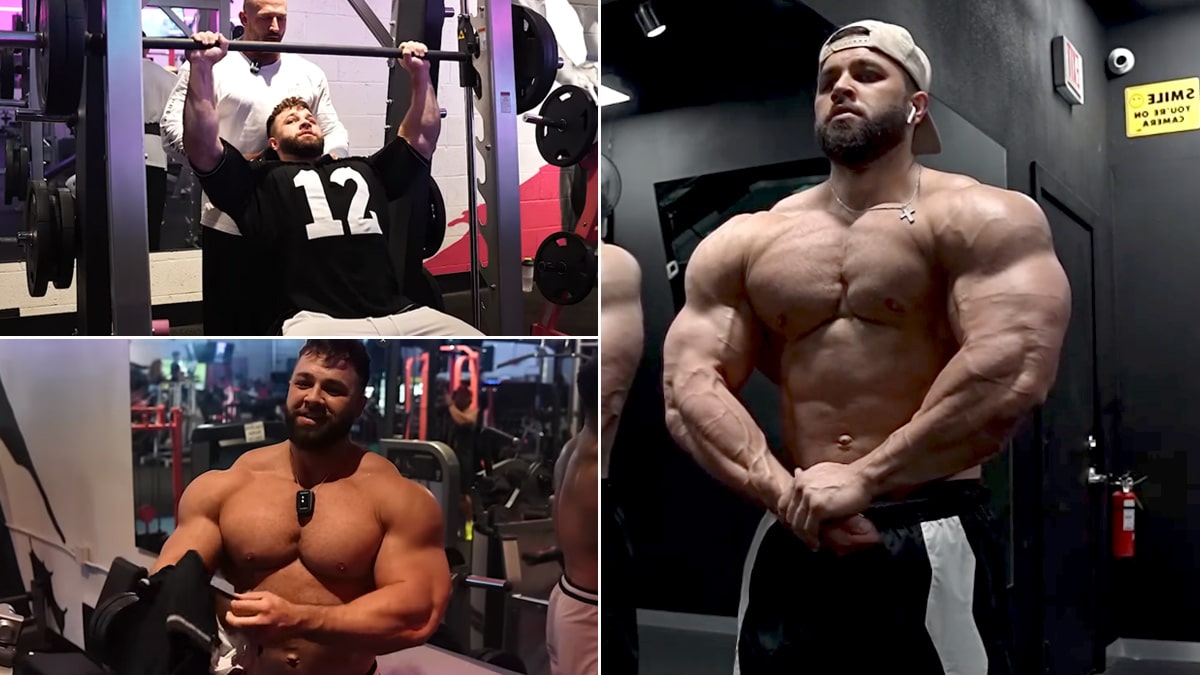 Regan Grimes is leaving no stone unturned to improve his physique. Grimes is a Canadian professional bodybuilder that competes in the Open division of the IFBB Pro League. The 29-year-old competed consistently over the last couple of years and gained momentum in the final stretch of the 2021 competitive season. Regan was placed fifteenth at the 2021 Olympia. He then finished second at the 2021 Legion Sports Fest Pro and emerged victoriously at the 2021 Egypt KO Pro, earning a direct invitation to the 2022 Olympia.

However, Regan could not build on the momentum in 2022 and had to make peace with consecutive seventh-place finishes at the 2022 Arnold Classic and 2022 Boston Pro. Following these humbling performances and advice from his coach Milos Sarcev, the Canadian decided to take the rest of the year off and improve his physique for the 2022 Olympia. However, Grimes recently shocked the bodybuilding community with his decision to pull out from the 2022 Olympia to focus on the 2023 Olympia.

Recently, Grimes went through an intense upper body workout with coach Andy Velcich. Although shoulders were the primary focus of this workout, Grimes also did upper chest, triceps, and biceps exercises in this session.

As for the intra-workout drink, Grimes added:

Grimes started the training session with cable rear delt flyes to work the posterior deltoids. This stubborn muscle is difficult to activate with most shoulder exercises that primarily target the anterior and the lateral delts. Therefore, it is worthwhile to incorporate rear delt-specific exercises in your shoulder routine.

“Bring (the arm) across at the eye level. Let the shoulder elevate a little bit, and as (you are) coming across, see the arm bend a little bit. That’s to let the shoulder really come over and get a big stretch and then pull it. So, it’s not completely a straight-arm exercise. If you want to get a load into the rear delts itself, you’re going to see better results in my opinion,” Grimes explained.

Grimes performed warm-up sets followed by two working sets using the progressive overhead principle and moved on to the next exercise. While explaining the rep range for the exercises in this workout, coach Velcich explained:

“We’ll go higher repetitions if we’re in the groove and the weight feels good, there is no reason why to bail on the set just because you’re hitting 20 reps. We’re just going to take it to failure…”

Grimes next took to this exercise to work the posterior deltoids. While speaking about the technique and the range of motion, Grimes said:

“You definitely get a secondary muscle group, traps, in there with this exercise. Even with the reverse pec deck for rear delts, I’m all about going heavy on it. If I can work my traps, why not? I don’t know why people say, just hit the rears, don’t go back so far.”

Velcich opined that women generally avoid working traps with rear delts for aesthetic reasons. However, that should not be a reason to worry for men considering their body composition. Grimes performed the sets with the same principle applied for the rear delt pulls and cranked-out warm-up sets followed by two working sets.

Single-arm side raises on a plate-loaded machine

Grimes shifted his focus on working the medial delt head and started with single-arm side raises on a plate-loaded machine. While sharing his opinion on the correct form for this exercise, Grimes explained that the arm has to be slightly bent at the elbow, and the fist should be in a horizontal position—similar to how it would be when you’re pouring a drink through a bottle.

“You’re decompressing the shoulder taking the trap out of the movement,” Velcich said.

Behind-the-back single-arm side raises on a cable machine

Grimes took to the behind-the-back variation of the single-arm side raises next. The cable machine provides a greater range of motion and allows the lifter to build on the work put in with a plate-loaded machine.

This was the first exercise to work the pecs. The Smith machine bench press primarily works the middle pecs, and since it is a compound movement, it also hits the anterior delt head and many other upper body muscles.

Grimes next took to the shoulder press on the Smith machine. This compound movement is one of the most effective exercises to build upper body strength. The exercise primarily targets the anterior deltoid heads. However, since the duo set the bench at a slight angle, it also hit the clavicular pectoral head. Grimes started with warm-up sets and wrapped up with two working sets of this exercise.

Grimes next took to the triceps workout and performed different variations of triceps extensions and cable push-downs.

Full elbow extension drives the triceps to a full contraction. Additionally, the shoulders should be locked in position to avoid the front delts from creeping in. The reverse cable triceps extension provides the best shoulder alignment and a full range of motion without losing shoulder stability.

Following this, Grimes took to single-arm overhead cable triceps extensions. While doing this exercise with both arms limits the range of motion, the single arm variation negates this flaw, allowing the elbow to be fully extended for maximum triceps contraction.

This exercise served as the finisher of Grimes’ triceps routine. He performed a few reps in each set unilaterally and switched to using both arms for the last few reps.

After the training session, the 28-year-old shared his post-workout shake, which consisted of:

This shake helps him sustain until he reaches home and consumes the post-workout meal that consists of:

Grimes’s weight was in the 290–295-pound range at the time of recording this video. While this is the heaviest he has been, Grimes feels he needs more time to add more muscle to his frame. As a result, he has pulled out of the 2022 Olympia.

Grimes and his coach Milos Sarcev sat down with Jay Cutler on a recent episode of the Cutler Cast podcast and explained the reason for pulling out of the 2022 Olympia in detail. Although Grimes announced his decision to withdraw from the 2022 Olympia, he didn’t reveal when he would be stepping on stage next. However, one thing is for sure—whenever he decides to compete again, he’ll be bringing his best package to the stage.