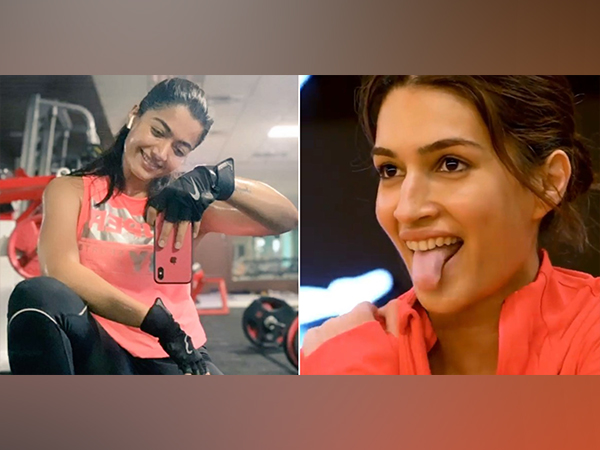 In the video, the two actors could be seen discussing something inside a gym, sitting on the floor in a squat position in between their workout sessions.
Rashmika responded to the video and wrote, “Karan Sawhney- Kriti Sanon and I are discussing world problems ya.. don’t disturb” followed by laughing emoticons.

Along with her the ‘Mimi’ actor also shared the video on her Instagram story.
Karan, in the video, could be heard saying “I need to be stricter.”
Soon after the video was posted, it got viral on social media and fans are currently praising the bond both the actors share.
Meanwhile, on the work front, Kriti has a massive and one of the best lineups of films ahead including the much-awaited Pan India film, ‘Adipurush’ opposite Prabhas and Saif Ali Khan, ‘Ganapath’ alongside Tiger Shroff, which is slated to release on the occasion of Christmas 2022.
Apart from that she also has ‘Shehzada’ with actor Kartik Aaryan, which is all set to hit the theatres on February 10, 2023, and a horror comedy ‘Bhediya’ opposite Varun Dhawan, along with Anurag Kashyap’s unannounced next.
Rashmika, on the other hand, will be next seen in a Pan-India film ‘Sita Ramam’ alongside Dulquer Salmaan and Mrunal Thakur. The film is slated to release on August 5, 2022, in Telugu, Hindi, Tamil and Malayalam.
Apart from that, the ‘Kirik Party’ actor will be also seen in the upcoming Bollywood flix ‘Mission Majnu’ alongside Sidharth Malhotra, ‘Goodbye with Amitabh Bachchan and ‘Animal’ with Ranbir Kapoor. (ANI)