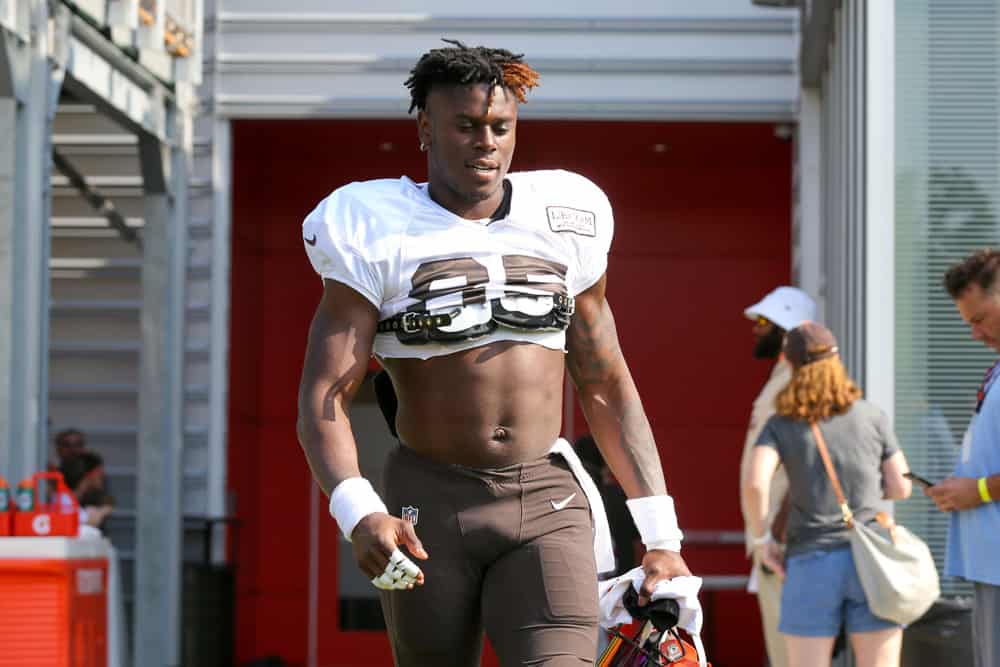 With tight end Austin Hooper off to the Tennessee Titans, David Njoku will be called upon to take on more of the load for the Cleveland Browns this upcoming season.

With Amari Cooper as the only established receiver on the roster, Njoku will have to build upon the 475 yards and four touchdowns he posted in 2021.

With training camp just days away, he has been putting in work to get ready for the season, and he was seen doing an interesting workout that requires some serious skills.

The balance. The concentration.

A strong season from Njoku will help the Browns contend for a playoff spot while also helping to somewhat overcome what seems like the inevitable suspension of new quarterback Deshaun Watson.

Njoku Will Be Taking Over For A Diminished Hooper

When Hooper came to Cleveland a couple of years ago, he was coming off a four-year stint with the Atlanta Falcons that included two Pro Bowl selections and an appearance in the Super Bowl.

But his production fell in 2020 to 435 yards and four touchdowns, compared to 787 yards and six touchdowns the previous year, both of which were career highs.

This past season, Hooper put up just 345 yards and three touchdowns despite playing in three more contests than he did in either 2019 or 2020.

His catch percentage, which was stellar in Atlanta, fell to just 62.3 percent in 2021, and he dropped six passes as well, which accounted for nearly 10 percent of the passes in which he was targeted.

Njoku, on the other hand, caught a solid 67.9 percent of his passes in 2021 while dropping only two.

To be sure, he isn’t the exact same type of tight end as Hooper.

Hooper has a career average of 10.1 yards per reception, while Njoku is at 11.9, including a career-high 13.2 this past season.

In Week 5 versus the Los Angeles Chargers, he turned a seemingly routine reception into a 71-yard touchdown run.

Now that he has his big contract, is #Browns TE David Njoku poised for a breakout season and make a Pro Bowl?pic.twitter.com/h4yRIxfYzX

Armed with a new four-year, $56.75 million contract, perhaps Njoku will feel emboldened enough to have the season of his life in 2022.

If Watson is forced to miss some games, as just about everyone expects, the Browns will likely have to win ugly to keep their playoff hopes alive.

That would mean everyone will need to step up their games, and even though they would need to win on the defensive side of the football, it would also mean that the offense will need to be more precise.

Watson’s great talents give his teams something of a margin of error, but having Jacoby Brissett step in while Watson is out would eliminate that margin for error.

Njoku will be one of a number of skill players who will need a career-best effort to overcome Brissett’s limitations in terms of consistently making plays downfield.

That means running routes well, not dropping passes and breaking as many tackles as possible.