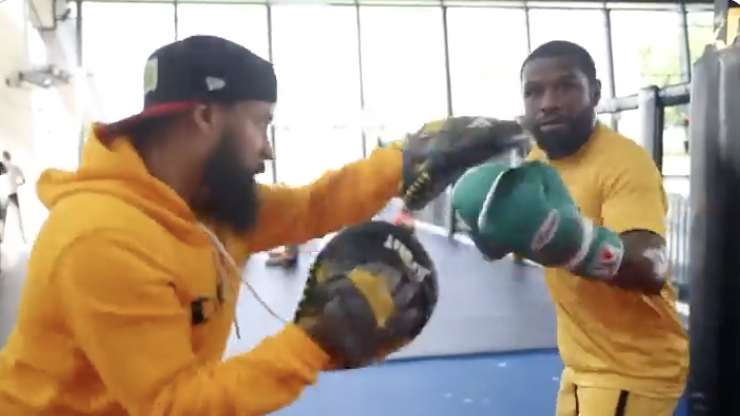 Floyd Mayweather enjoyed another easy big payday during his exhibition bout against former sparring partner Don Moore – but it was his pre-fight routine that took social media my storm.

The bearded 45-year-old showcased his skills with a punishing performance on his return to the ring, where he dropped Munroe with a body shot in the closing minutes of the eight-rounder, although no scores and no winner were announced in Abu Dhabi.

Mayweather was clearly out to enjoy his night and further entertained the crowds by dancing with the ring girl and also spoke to the commentators while fighting.

Ringside commentator during Floyd Mayweather’s exhibition fight with Don Moore: “This is one of the things that Floyd does best, psychological warfare.”

Floyd turns to face him: “I do do that.” pic.twitter.com/0NLOlq4f7E

In the aftermath of the bout, social media star Jake Paul, whose brother Logan stayed on his feat during an exhibition fight with Mayweather last year, issued a challenge to ‘Money’ as well as former UFC champion Anderson Silva, who had an exhibition bout on the same bill.

And that could well be on the cards after Mayweather said: “I want to say thank you to the UAE (United Arab Emirates). I waited for this moment for 26 years and we’re finally here and we finally did it, so I will bring another fight back this year.

“It’s a secret, I don’t want to let the cat out of the bag right now, but we have an opponent and we had to choose a place and the place that I will choose is the UAE.”

Earlier in the day, Mayweather’s pre-fight pad work went viral on social media, as fans were blown away by his routine.