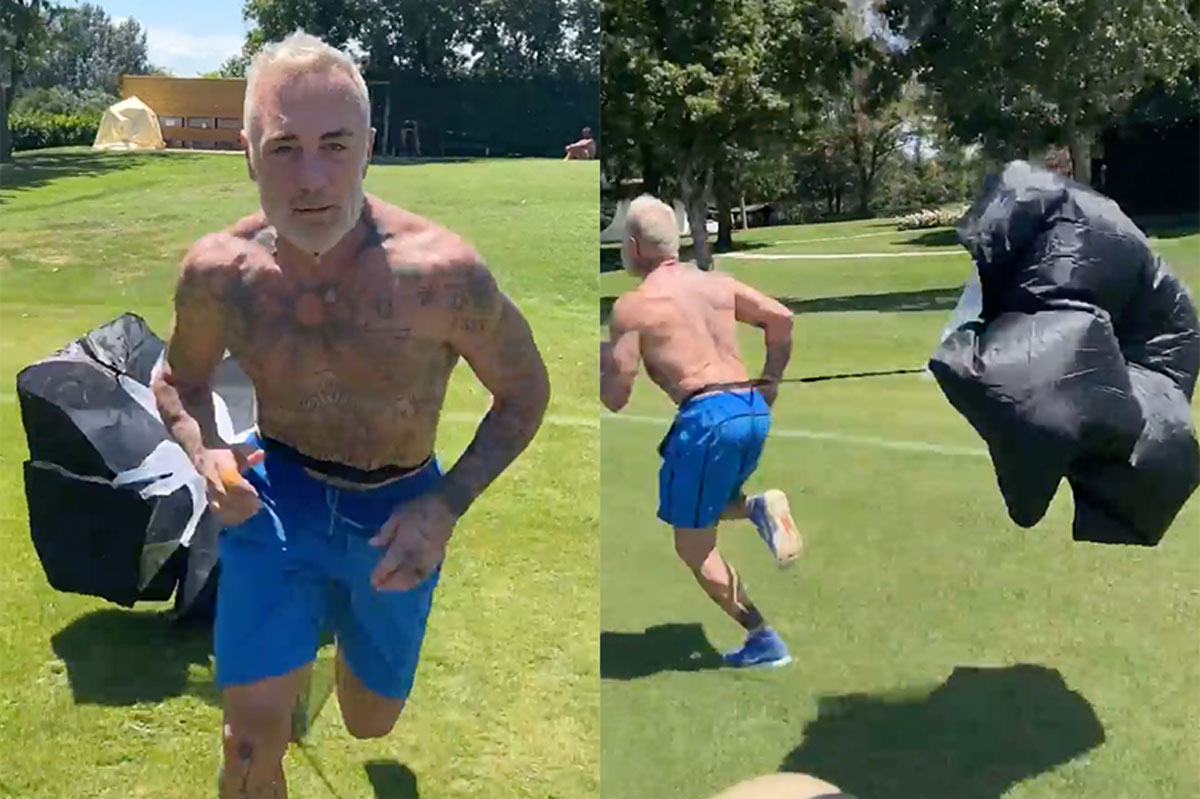 Gianluca Vacchi continues to defy the ageing process with an intense sprint workout that will truly separate the men from the boys.

Gianluca Vacchi, the 54-year-old multi-millionaire, is a man who loves to keep himself in tip-top shape. Whether he’s using some space-age equipment or just smashing out a brutal workout in the gym, the man is all about pushing his body to its limits.

And now, Gianluca is back at it again, this time performing sprints with a parachute tied around his waist. But, before you think, “what the hell is he doing now?” Gianluca is actually performing what is known as resisted sprint training.

Posting a video to his Instagram account, Gianluca can be sprinting down a field so fast that the parachute attached to his waist is able to fully deploy. Whoever is filming him actually seems to have a tough time keeping up with him in their motorised cart. It’s an impressive sprinting drill for sure (just as impressive as Gianluca’s insanely ripped rig).

“Resisted training helps athletes increase their speed-to-strength ratio which improves their ability to generate greater force during sprint starts, or during any quick accelerations while running.”

With advances in technology and understanding of the benefits of running against resistance, there are now multiple methods to choose from, with Gianluca’s example of parachute sprint training being one of those. The other main two methods are sled resisted training and hill, or incline sprints.

Parachute training, as demonstrated by Mr Vacchi, was “one of the most popular forms of resisted sprint training in the early 2000s,” according to CoachUp.com. There are multiple benefits to using parachutes for resisted sprint training, chief among which is their accessibility. They’re affordable and can be easily packed into a bag to take with you wherever you want to go.

While Gianluca may be using his parachute for some casual training, top-level athletes use them (and other forms of resisted sprint training) to help them improve their sprinting speed and technique. Athletes using this form of training do so to track and measure their kinematics.

“Kinematics include measures of stride length, stride frequency, range of motion measurements at each joint, and ground contact time to name a few,” CoachUp relates.

There have been studies performed using all three resisted sprint methods, but one study in particular examined the effects a large parachute had on a group of experienced athletes. “After 4 weeks, the resisted sprint group improved their 0-20 meter speed by 3.3%compared to the unresisted group who improved by 1.8%.”

Another study that examined the effects of parachute training, along with weighted sled and weighted belt training, said “The desired outcome when performing a resisted sprint training exercise is a reduction in running velocity without inducing substantial changes in the athlete’s sprinting technique.”

“In our study, all 3 devices produced a reduction in running velocity and so these devices are appropriate for training the maximum velocity phase of sprinting.”

The study also found, “The reduction in velocity was greatest for the weighted sled, and suggests that this device may be the most effective in improving maximum sprint speed.”

It’s clear then, that resisted sprint training can have a monumental effect on your sprinting ability. If you’re looking to improve yours, its’ well worth a shot.