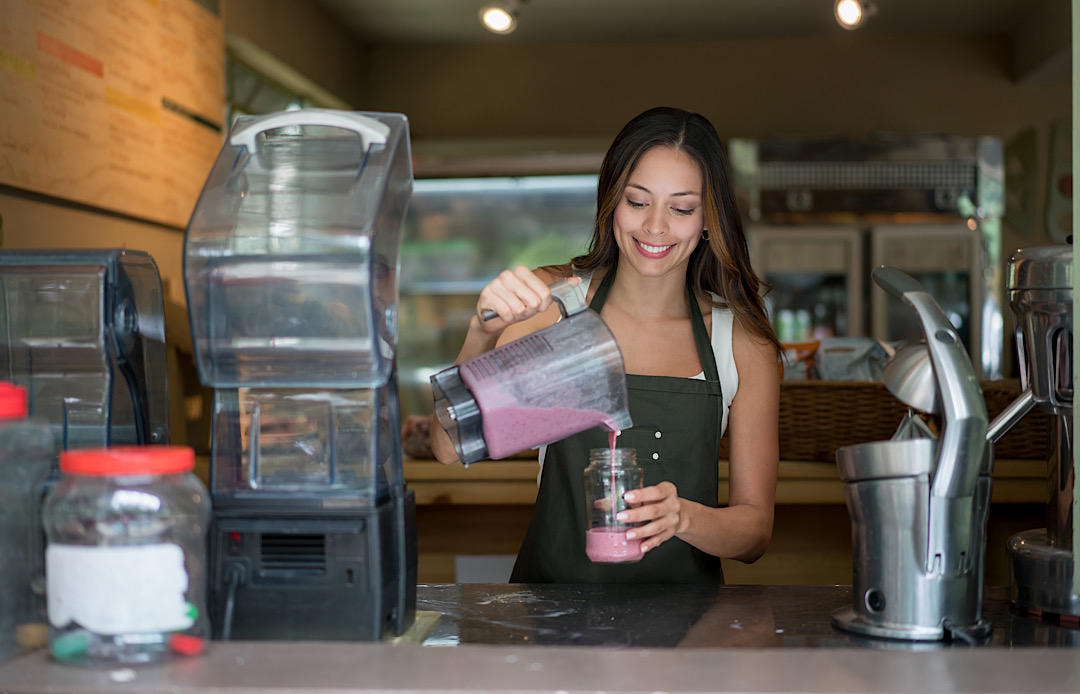 If you happen to find yourself hungry after class at the Upper West Side location of boutique fitness giant Barry’s, you’re in luck—at least if you like a post-workout smoothie.

You could go to Juice Press, which is two blocks away from the studio. Or, there’s Joe and the Juice, which is three blocks away, or Juice Generation, which is four blocks away. Or, most conveniently, there’s Barry’s in-house Fuel Bar, where you can order a shake prior to your workout and have it ready for you when you’re done.

The high density of smoothie locations in those few Manhattan blocks (that also contain an Orangetheory, a CorePower Yoga, and an Equinox, which has its own cafe, including smoothies), may seem unusual. But really, it’s just an exaggerated example of the decades-long marriage between the fitness industry and the post-workout smoothie. It’s a connection so profitable that opening smoothie spots near gyms has literally become part of the former’s business model.

So how did smoothies become nearly synonymous with fitness culture?

The history of the smoothie’s popularity is tied up in the history of fitness itself. It dates back to the mid-70s when working out was becoming more common, and gyms—once dark, bare-bones scenes usually exclusive to men—were beginning to market to women. As more women began working out, gym owners recognized their spaces’ potential as a social setting, says Danielle Friedman, author of Let’s Get Physical: How Women Discovered Exercise and Reshaped the World.

Meanwhile, the smoothie itself was gaining traction: What was once a niche item mostly consumed by California counter-culturalists and bodybuilders was becoming widely available as health and fitness culture became more widespread, with popular chains like Smoothie King, which opened at 1973, and later Tropical Smoothie Cafe, Planet Smoothie, and Jamba Juice popping up in more places.

Somewhere along the line, smoothies overtook their sister beverage, juice, as the typical gym offering (though many establishments that serve one still serve the other), and though fitness culture has changed dramatically since the ‘70s and ‘80s, the smoothie persists.

Why gyms and studios stan the post-workout smoothie so much

Today the gym’s status as a social space has wavered as a growing culture of efficiency has popularized the “get-in-get-out” workout. And yet this shift hasn’t impacted the popularity of smoothies since they are tailor-made to grab and go, to sip on while en route to another destination, or while back at work.

Joey Gonzalez, the CEO of Barry’s who launched the Fuel Bar in 2011 (it is now at 77 of their 82 locations), says that the smoothies it serves have become a way for clients to extend the Barry’s experience outside the studio, wearing their branded smoothie cups like a badge of honor on the street, in the subway, or at the office.

Indeed, smoothies can be good business for gyms and studios that serve them in-house—at least according to the dozens of industry articles encouraging gym and studio owners to explore this revenue stream. Logistically, it’s a way to serve a fresh, substantial item without investing in a full kitchen, says Natalia Mehlman Petrzela, an associate professor of history at The New School and author of the forthcoming Fit Nation: The Gains and Pains of America’s Exercise Obsession. And at a moment when there are more at-home exercise options than ever, it behooves gyms and studios to offer such amenities that can only be enjoyed in-person, points out Friedman.

Just as it’s nearly obligatory to buy popcorn at the movies, a post-workout smoothie is a part of the in-person gym experience for a lot of folks. This cultural connection has thus far withstood the test of time—and the rapidly changing trends in both fitness and nutrition—because smoothies are such a malleable category. They are customizable, and can be packed with supplements and other trendy ingredients. In other words, the smoothie is highly capacious, says Petrzela, meaning there’s room to add so much to them.

But are post-workout smoothies the best way to refuel?

Despite their popularity and ubiquity, smoothies produce a conflicted response amongst sports dieticians as a recovery food since, depending on their ingredients, they often contain too much sugar or fail to pack the combination of protein and carbohydrates needed after a tough workout. Even a smoothie engineered with the proper nutrients can’t satiate you the way solid foods can, says sports dietician Amy Stephens, who adds that this can lead to overeating later in the day. On the other hand, smoothies can have the two-in-one value of being both hydrating and nutritious, in addition to being highly convenient.

Personally, Petrzela says she is wary of any food that claims optimization as a main benefit, or that has the potential to strip away the social function of food. There’s also the fact that smoothie ingredients are often marketed as magical ‘superfoods,’ says Emily Contois, a media studies professor at the University of Tulsa and author of Diners, Dudes, and Diets: How Gender and Power Collide in Food Media and Culture, which is a red flag to look out for when it comes to receiving nutrition advice, especially in the context of fitness.

But with the right ingredients, and in the right context—as in, not a replacement for an actual meal—Stephens says a smoothie can be a perfectly nutritious post-workout snack. The keys to its long-term success may just be the same as the keys to seeing any long-term gains when it comes to fitness: convenience and consistency.