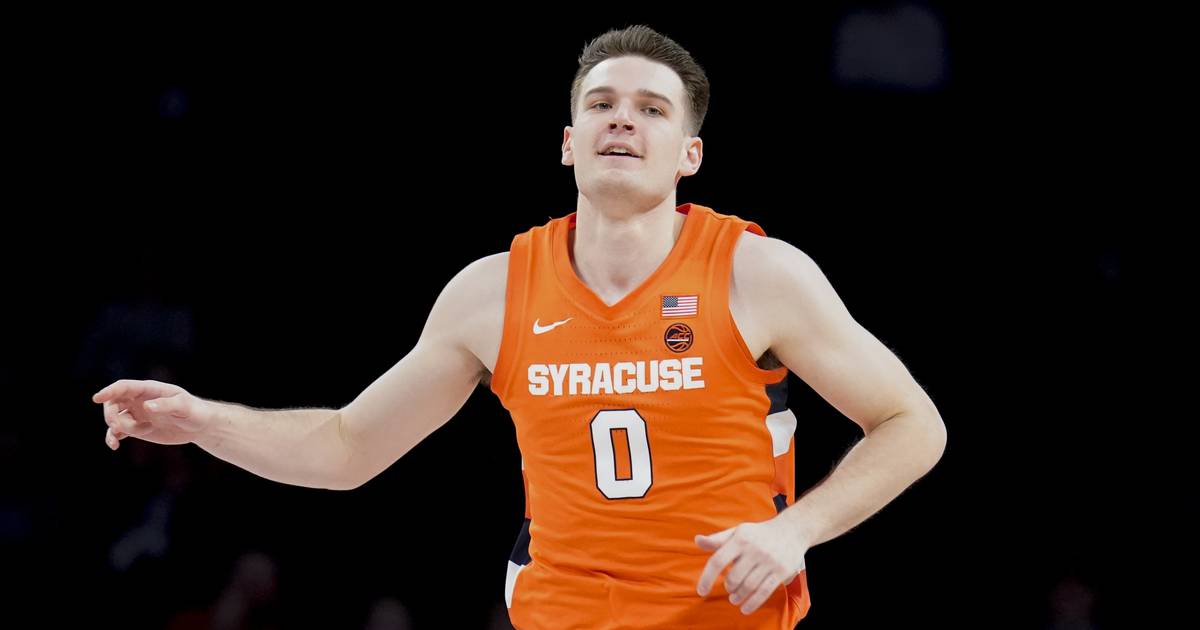 Jimmy Boeheim is tabling his Ivy League degree and future in finance for his dream of professional basketball.

That dream brought him Thursday to Tarrytown, where Boeheim, the son of legendary Syracuse coach Jim Boeheim, worked out for the Knicks at their practice facility with a group of five other draft-eligible prospects.

Boeheim, who played last season for his father after graduating from Cornell, will likely go undrafted later this month. But he’s willing to play in the G League or overseas.

It’s less stable but probably more exciting than the paths of his Cornell classmates.

“A lot of them are in the City doing stuff in finance. It’s good for them,” he said. “Right now I’m hoping I don’t’ have to use my degree for a while. I’m just enjoying this game, seeing how far it’ll take me.”

The coach’s son is chasing his pro basketball dreams before he joins his Cornell classmates on Wall Street. (John Minchillo/AP)

Jimmy, 24, a 6-foot-8 forward, is viewed as the lesser prospect of the Boeheim brothers, with Buddy, the younger sibling by 18 months, projected as a possible second round pick because of a top-level 3-point shot.

The brothers were key contributors to Syracuse’s 16-17 season, which ended controversially for Buddy because he was suspended for the final game after hitting a Florida State player in the stomach.

Buddy previously worked out for the Knicks, according to college basketball reporter Adam Zagoria, and Jimmy said Thursday his game has benefitted from practicing with his brother.

“He’s a great shooter, for sure,” Jimmy said. “That’s been an area of focus to build on my shot. I’ve come a long way and it feels great right now. So it’s about continuing getting more consistent. It’s great when you can shoot with one of the best shooters in the country every day in my brother.”

Jimmy was forced to take a year off from basketball because the Ivy League shutdown its entire season of 2021-22 amid the pandemic. He then graduated from Cornell with a finance degree and transferred to Syracuse for his final year of eligibility, averaging 13.4 points over 33 games while proving capable of producing in a major conference.

The Daily News sports editors handpick the week’s best Yankees stories from our award-winning columnists and beat writers. Delivered to your inbox every Wednesday.

He also had to learn a new name for his father.

“It was a little adjustment. I never really knew what to call him – Dad, coach,” Boeheim said. “It was weird to call him coach after calling him dad for so long. But it was awesome the moments we got to spend with one another.”

Jimmy Boeheim had worked out for a few NBA teams before Thursday but acknowledged a special affinity for the Knicks because they’re somewhat of a local team and Carmelo Anthony is an Orange legend.

Jim Boeheim, the Syracuse coach, is also close with Knicks coach Tom Thibodeau and both were assistants on the gold medal U.S. team at the 2016 Olympics.

So Thursday was an opportunity for Jimmy to impress in a 3-on-3 setting, and we’ll see if it leads to draft consideration or, more likely, a G League invite.

“I love basketball more than I ever have right now. I’m so into it, there’s no way I can give it up right now,” he said. “Whatever basketball throws at me—G league, NBA, overseas—whatever it may be, I’m ready and will attack it with all I got and continue to have fun and love the game.”

If nothing works out, Boeheim can always return to NYC on Wall Street.