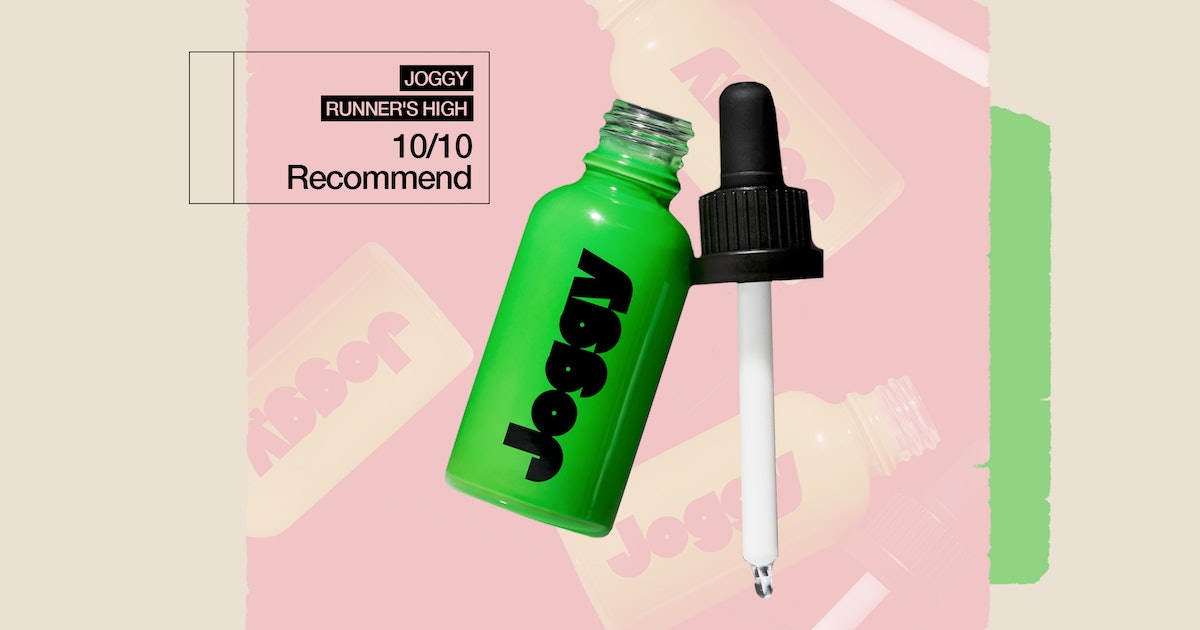 If that euphoric feeling you experience after a run could be bottled up and sold, I’d be willing to bet that most people rush to buy it. Anyone who’s ever gone for a run knows the sensation: After breathlessly pushing through those miles, you get rewarded with that all-beloved runner’s high — aka the happy chemicals released into your brain after vigorous exercise that gives you what I could only describe as a full-body orgasm. So you could imagine the excitement and intrigue I felt upon discovering the Joggy Runner’s High, a plant-based tincture that purportedly delivers just that.

To replicate that jazzed-up euphoria you get after a run, Runner’s High relies on a special blend of cannabinoids and alpha-pinene, an energizing botanical, all swirled together into an elixir you only need a few drops of to reap the benefits. The idea is that these special compounds can bring about a feel-good zest without having to knock out a 3-mile run (though I’ve learned that the effects are even better when you pair the tincture with a workout).

Sounds too good to be true, doesn’t it? I tested Runner’s High for a month to see. A little hint: Some plants can be pretty darn powerful. Read on for my honest review.

We may receive a portion of sales if you purchase a product through a link in this article.

What Is The Joggy Runner’s High?

Joggy is the brainchild of Ty Haney, the founder and former CEO of Outdoor Voices (the wildly popular athleisure brand famous for its exercise dress and super cute leggings). With her latest endeavor, the entrepreneur is keeping in line with her passion for movement — only this time, rather than workout wear, she’s doing it with CBD-spiked plant-based topicals and ingestibles aimed at optimizing your mind and body.

Within the Joggy line are things like gummies, tinctures, and a dreamy muscle tension-melting balm (which I’m also a big fan of). Runner’s High is one of the brand’s two tinctures; as opposed to Ready Steady, a calming, de-stressing elixir, this one is all about delivering focus, non-jittery energy, and a pre-activity boost.

Runner’s High relies on a trio of active ingredients to do its job: CBD, THCV, and alpha-pinene. To give you the most out of the CBD, it contains a full spectrum of the stuff — as in multiple cannabinoids (like terpenes, cannabidiol, and a very trace amount of THC) that come from the cannabis plant. This, according to the brand, is where the high-vibe feeling will come from.

Then there’s THCV, a non-psychoactive cannabinoid that delivers a steady state of energy. This ingredient is more under-the-radar but offers some unique benefits. “Studies on THCV indicate the cannabinoid helps with a certain amount of pain management, but what really makes this lesser-known cannabinoid stand out are its properties related to increased energy,” says Vince Sanders, a researcher and president and founder of brand CBD American Shaman. When taken together with CBD, Sanders notes the compounds can elevate the “positive experience” and can feel more euphoric with the right balance. “The combination also increases the longevity of the feeling,” he says.

Alpha-pinene is an impressive ingredient, too. It’s an antioxidant-rich anti-inflammatory terpene, which is a compound that comes from plants. And this baby, according to research, can enhance brain and memory function. Joggy says it can also support focus and mental clarity, which are two things I’m literally always looking for.

My to-do list is never not chaotic, and I’m not the most organized person — which doesn’t help with my productivity game. Pair that with the afternoon slump I sometimes experience, and you could say I’m a good candidate for a focus-boosting, energizing elixir. I’ve tried coffee (obviously) and energy drinks like Celsius, but nothing has quite given me the steady bursts of non-distracted productivity that I could really use to do my job.

On top of that, I absolutely love to run… but my body doesn’t always cooperate. Sometimes it’s because I’m attempting a treadmill boot camp first thing in the morning, and other times it’s due to extra-sore legs — whatever the case, my workouts aren’t always smooth sailing. So Runner’s High was appealing to me as both a work and exercise booster.

You’re meant to take Runner’s High whenever you need it. If you’re hoping to amp up your workout performance, take it right before you start exercising. The same goes if you’ve hit a productivity wall or can’t stop yawning. Joggy recommends starting small if you’re new or sensitive to cannabinoids and taking just half a dropper, but the standard dose is a full dropper (1 ml). You can drop it directly into your mouth or blend it into a smoothie.

I first tried Runner’s High as an alternative to my afternoon coffee. My first thought? Upon dropping it onto my tongue, I noted its unpleasant taste — it basically tastes like very earthy weed (not my thing). It’s meant to work quickly since Joggy formulates its tinctures to be bioavailable; Its CBD is delivered via a water-based lipid encapsulation system instead of an oil-based one, making it easier for your body to absorb, according to the brand. Roughly 10 to 15 minutes after taking it, I did have an easier time concentrating on work, and I didn’t feel as tired as I sometimes do in the late afternoon. I was excited to see what the product could do for my workouts.

Before doing a boot camp, I took a dropper full of the tincture — and then slayed that workout. Seriously: I was able to push through tough running intervals and weight lifting reps with more ease than usual. Sure, I’m a fitness editor and workout devotee, but I still have days where it feels impossible to make it through a sprint interval or strength training set. Runner’s High gave me that extra push in endurance that allowed me to perform like the athletic beast that I prefer to be in the gym.

I continued taking Runner’s High for a month, sometimes for energy, but mainly for a pre-workout jolt — and every time I did, it had the same feel-good, motivating effect. I began to suspect it was a placebo effect, but research backs up Joggy’s claims. According to research conducted by the National Academies of Sciences, Engineering, and Medicine, the combination of THCV and CBD can offer some pain relief. So, when you think about it, feeling less pain can translate to being better able to push through a tough workout. It’s the stuff of my dreams, really.

If you regularly rely on extra caffeine or a pre-workout powder for energy and/or an endurance push, Runner’s High is definitely worth the investment. I’ve tried all sorts of supplements and drinks in those two categories, and most have either made me feel shaky and anxious or resulted in a crash not too long after taking them. Joggy’s tincture brings the jolt and focus I’m looking for — without the unpleasant side effects of other options on the market. IMHO, it’s a great buy.

Despite the shelves being filled with countless CBD tinctures to choose from, it’s not too easy to find one that combines CBD with THCV. But there is Dawn from Gossamer, an energizing formula that happens to also contain pinene. This one runs $39 for a 1-oz bottle, significantly less than the Joggy blend — but it’s not currently in stock. CBD brand Kush Queen also pairs the cannabinoids into a stress-reducing, energy-boosting $89 tincture. Both of these alternatives, however, aren’t water-based, which is why Joggy’s is more bioavailable.

As someone who works out a lot, Runner’s High works as the perfect leg up so that I can experience an even better endorphin rush — which is the ultimate reward after a good sweat.

Editor’s note: Readers should note that the regulations and data surrounding marijuana, CBD, and other related products are still developing. As such, the information contained in this post should not be construed as medical or legal advice. Always consult with your doctor before trying any substance or supplement.

National Academies of Sciences, Engineering, and Medicine; Health and Medicine Division; Board on Population Health and Public Health Practice; Committee on the Health Effects of Marijuana: An Evidence Review and Research Agenda. The Health Effects of Cannabis and Cannabinoids: The Current State of Evidence and Recommendations for Research. Washington (DC): National Academies Press (US); 2017 Jan 12. 4, Therapeutic Effects of Cannabis and Cannabinoids. Available from: https://www.ncbi.nlm.nih.gov/books/NBK425767/

Vince Sanders, a researcher and president and founder of brand CBD American Shaman

Get Even More From Bustle — Sign Up For The Newsletter

From hair trends to relationship advice, our daily newsletter has everything you need to sound like a person who’s on TikTok, even if you aren’t.