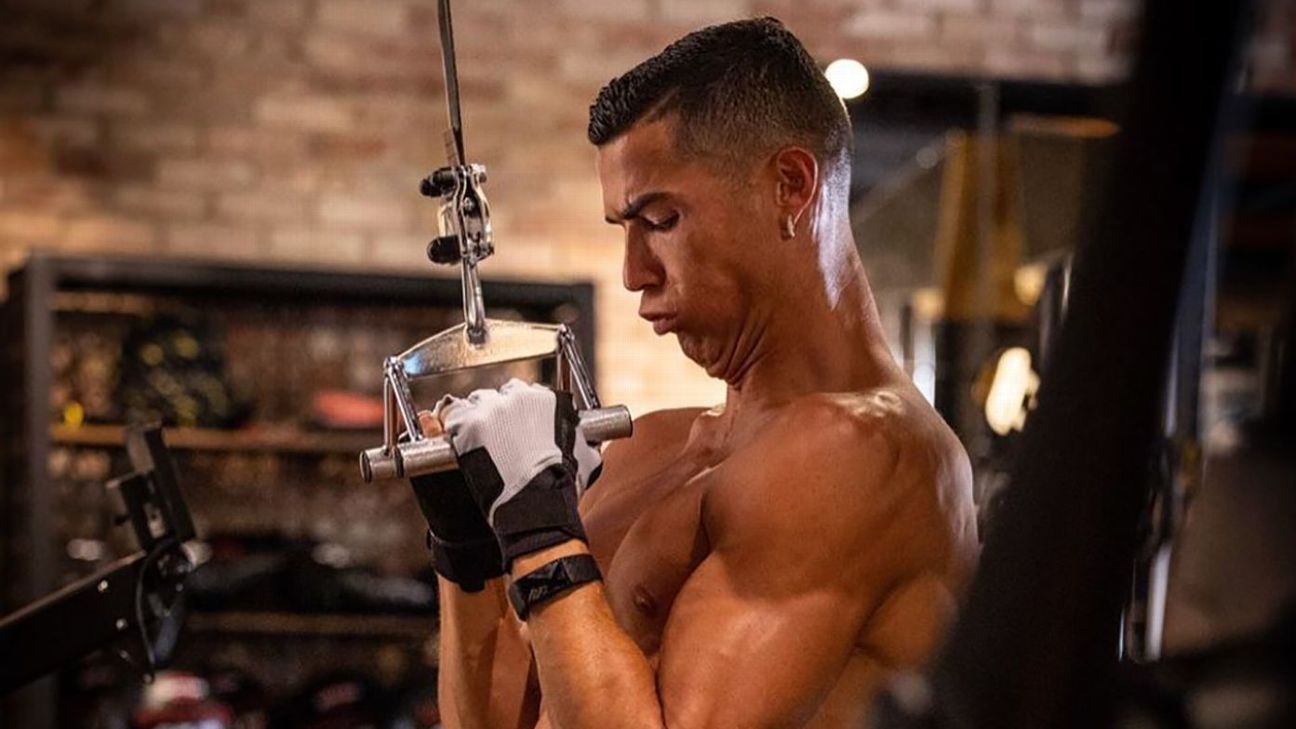 Take a look at Manchester United forward Cristiano Ronaldo‘s Instagram account at any time and you will likely see photos and videos of the 37-year-old working out, honing his physique while wearing minimal attire.

This week has been no different, with the Portugal captain posting an image of himself, biceps straining and torso glistening as he put in the “HARD WORK” in the gym, preparing himself and his body for the rigours of a new season — the 21st of his professional career.

There are just three weeks until the new Premier League campaign kicks off and yet things remain unclear as to where Ronaldo intends to be next season since expressing a desire to leave Manchester United recently. Sources have told ESPN that the forward is reluctant to commit to a further year at Old Trafford due to mounting frustration over the club’s transfer activity coupled with a strong desire to play in the Champions League.

Chelsea were mooted as a potential destination and Ronaldo’s agent, Jorge Mendes, even met with the club’s new chairman Todd Boehly to discuss the matter. However, the notion was scotched when Boehly presented the proposal to Blues head coach Thomas Tuchel, who passed on Ronaldo in favour of pursuing other attacking options — namely, Raheem Sterling.

Sources also told ESPN that Ronaldo has turned down a vastly lucrative offer from an unnamed Saudi Arabian club said to be worth €275m in wages over the next two seasons — a contract that would have seen him become the highest paid player in the world.

Ronaldo is yet to speak publicly on the matter, and his future remains up in the air as we draw ever closer to the startof the 2022-23 season. However, United fans desperately searching for cryptic clues might well have found one hidden in his most recent Instagram post.

What first appears to be a run-of-the-mill workout pic also feature Ronaldo wearing what could be a very deliberate choice of clothing — his Manchester United shorts. Granted, they are last season’s 2021-22 black-blue-and-yellow training shorts but they are United shorts nonetheless.

Some excitable United fans with ready access to Ronaldo gifs took the sight of their hero decked out in United shorts as a clear indication that the striker would be staying put this summer.

Others expressed concerns over his decision to roll the shorts up just high enough to conceal the United club crest.

Yeah but he rolled them up for some reason lmao

While others took the time to point out that, given Ronaldo is still technically contracted to United, it would be strange to see him wearing any other club’s apparel as things stand.

why is everyone so gassed of ronaldo wearing man utd shorts on his twitter post, what else is he supposed to wear, Liverpool shorts?

The rest of the United squad are out in Australia where they took on A-League side Melbourne Victory in the second game of their global preseason tour.

For the second game of Erik ten hag’s reign, United scored four goals as they beat their Australian hosts 4-1 just three days after after beating Liverpool 4-0 in Bangkok.

The fact that their star man is on the other side of the world, busily beavering away on his lonesome in his home gym is hardly a promising omen for those willing him to remain at the club for next season.

But, until he breaks his silence and confirms his plans one way or the other, fans will be left to scour his social-media output for clues.