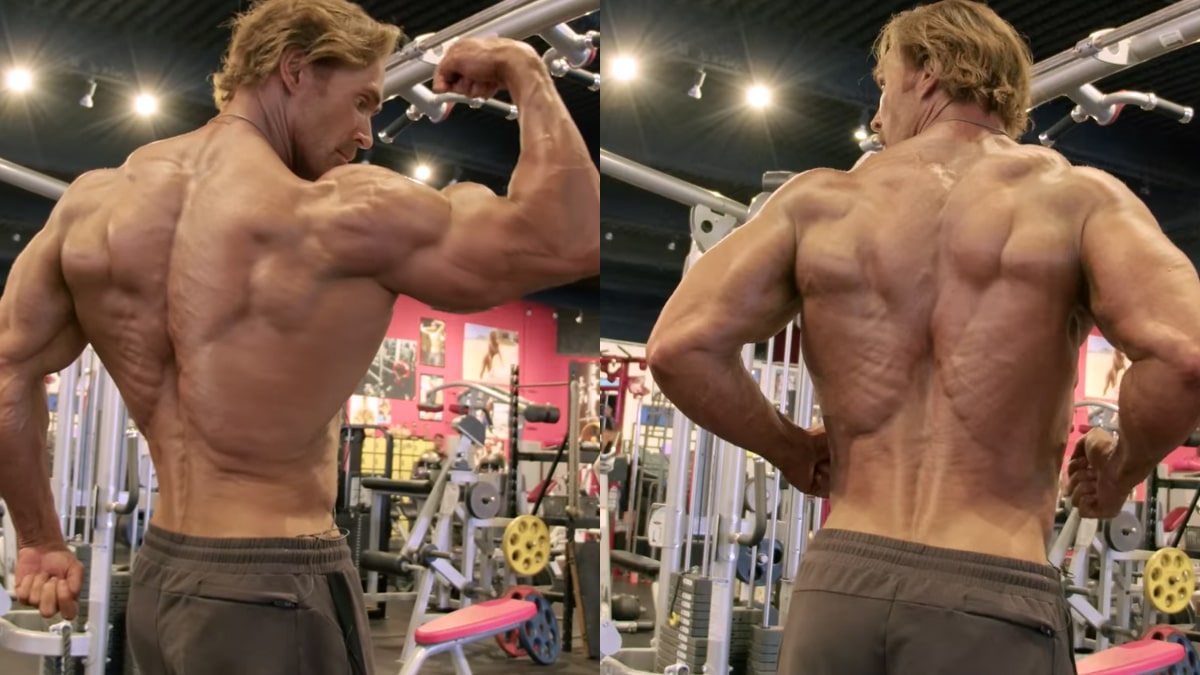 Mike O’Hearn, popularly known as the ‘Natty Greek God’ or the ‘Atlas of Bodybuilding,’ carries an impeccable physique and a youthful appearance at 53 years of age. During a nearly four-decade-long career, he has made successful forays in bodybuilding, powerlifting, acting, and modeling. He is best known for playing the role of Titan in the series American Gladiator (2008). In addition to winning the Fitness Model of the year award seven times, O’Hearn is a four-time Mr. ‘Natural’ Universe title holder. While his claims of being natty have been questioned on many occasions, the Titan has never tested positive for PEDs during his competitive career.

Recently, the 53-year-old was visited by Muscle & Strength Magazine at Dave Fisher’s Powerhouse gym in South California. In the video, O’Hearn shared insights into bodybuilding and an effective upper back workout.

Mike O’Hearn shares bodybuilding tips during an upper back workout

O’Hearn started the workout with a variation of arguably the most effective bodyweight exercise to build a V-taper—the pull-up. The Titan was in the middle of a prolonged fast while shooting the video. As a result, he was a lot leaner in the video compared to his typical off-season. O’Hearn claimed that it is relatively easier to get a full range of motion on the behind-the-neck pull-up when he is ‘sliced and lean.’

The behind-the-neck pull-up variation puts more emphasis on the upper back. But in addition to this, the lower back, arms, and chest also get an intense workout during the exercise.

“Upper lat’s going to fire, you’ve got no issues with that. But try to catch the little details. The little details would be that lower back. Are you contracting all the way through? I try to pinpoint the smallest area… toughest area to get to. If you can focus on that, everything else fires automatically,” O’Hearn explained.

O’Hearn finished a few sets of rear pull-ups and moved on to the next exercise.

The 53-year-old next took to another upper back exercise—the behind-the-neck pull-down. While doing this exercise, O’Hearn explained some common reasons people hit a plateau in their training and don’t get the expected results. He said:

He further explained that focusing on the strong lifts and ignoring the difficult ones is ‘the worst thing’ people can do in weightlifting.

“They make their stronger lifts stronger. That means their weaker lifts get weaker. That causes the imbalance, and then that causes the avalanche…” O’Hearn continued.

As a result, O’Hearn always tries to perform more complex and challenging exercises in his workouts.

O’Hearn next took to this exercise he learned from bodybuilding legend Francis Benfatto. Known for having one of the most conditioned and symmetrical physiques in the sport of bodybuilding, Benfatto is also known for effectively utilizing the Auto Regulation Training method that enabled him to compete well in his 40s.

“It’s a great exercise. So you’re basically doing a combination of seated rows and pull-downs but with the rope. The cool thing about this is you can put the elbows anywhere you want and that depends upon how you’re flexing your back.”

O’Hearn performed a few sets of this exercise with slow and controlled motion.

The 53-year-old finished his upper back workout with this variation of the seated row. While speaking about the benefits of this movement, O’Hearn said:

“So when you’re on stage, one of the little things Arnold (Schwarzenegger) said to me is, “What is the first thing they see when you walk on stage? It is the shoulders, the traps… That area… That superhero walkout…” So, for me, this is that motion…”

O’Hearn added that the bent-over position does not allow the pressure to come off the pull in this exercise. Presumably, that’s what makes this a great exercise to build the shoulders and upper back.

Mike O’Hearn reflects on Lee Haney’s opinion of him

In the video, the 53-year-old spoke about his experience interacting with one of his idols and bodybuilding legend, Lee Haney. O’Hearn stated that he met Haney way back when he first started competing. 40 years later, Haney sat down with O’Hearn for a candid conversation on ‘The Mike O’Hearn Show’ podcast and stated that he was proud of him.

“For him to stay stuff… He was talking to Lee Labrada, Frank Zane, and Rich Gaspari and they’re all talking about me and my career. They’re all proud of me and it’s like… My idols! The guys that got me pumped to go do this are talking about me at this stage of my career going… Good job! Holy Sh*! You’re doing something that nobody’s done… Staying strong for years… Stayed in shape for 40 years…” O’Hearn reflected on their opinion of him.

Having trained religiously for over four decades, Mike O’Hearn has witnessed different eras of bodybuilding and has accumulated a wealth of knowledge related to bodybuilding, fitness, and longevity. Irrespective of the ‘natty or not’ question, a lot can be learned from him.

You can watch the full video below, courtesy of Muscle & Strength’s YouTube channel: