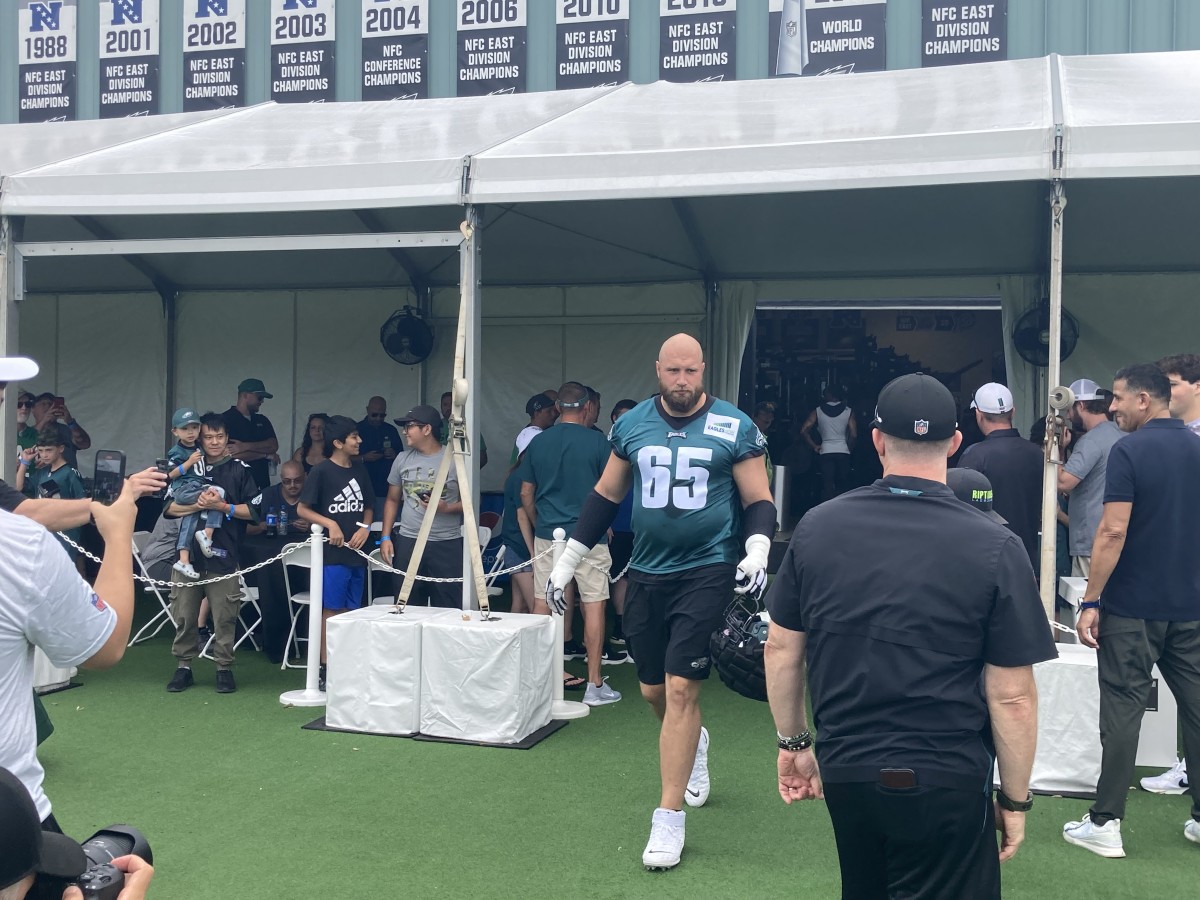 The Eagles owner told the offensive line coach, who was then in his very first season after leaving the University of Alabama, “we have to find out about these guys.”

These guys were the offensive linemen entering the 2013 draft. There were a bunch of them.

So, Stoutland went to Groveton, Texas. More specifically, Groveton High School, Johnson’s alma mater, to put him through a workout.

“He went to one of our restaurants and said we had rusty spoons,” laughed Johnson during a locker room interview on Friday afternoon. “I remember that day vividly. It was a fun time.”

Stout remembers it, too. And if he should forget, well, he still has the workout video on his cell phone.

“It’s something special for me,” Stoutland said earlier in the week. “It was a young Lane.

Johnson would beg to differ on that losing a step part.

“I’d argue that but what you may lose in some attributes, you gain in others,” he said. “Everybody evolves, everybody’s a little bit different than what they were younger, but I’m playing next to a good guard.

“Isaac (Seumalo) is a great person and great to play next to with his quickness and intelligence. He helps me out a lot.”

Johnson is about to begin his 10th NFL season when the Eagles open their 17-game trek through fall and winter in Detroit on Sunday (1 p.m./FOX).

He has developed into arguably one of the best right tackles in the game, overcoming two suspensions for PEDs, various injuries, including two recent ankle surgeries, and, last year, a public battle with anxiety and depression.

“Lane wasn’t Lane last year,” said Stoutland. “He was coming off that thing and he was fighting through some things.”

Johnson was still growing into his tackle body when Stoutland worked him out.

He left high school first for Kilgore (Texas) Community College then to Oklahoma.

Even though he had spent most of his four years at Oklahoma as a tackle, he was still physically transitioning from his original position of tight end.

Stoutland loved everything he saw from Johnson that day he worked him out and reported back to Lurie that he should be the team’s selection if he was there when the Eagles were scheduled to pick.

“I was immediately, I was like all about Lane Johnson,” said Stoutland.

Johnson knew he had done well. He had an inkling the Eagles were going to take him.

“I had a good feeling they wouldn’t pass on me,” he said. “I was thinking them, Detroit, or Miami. I didn’t think Kansas City was going to take me or Jacksonville.

Jacksonville went with OL Luke Joekel. He was out of the league after the 2017 season.

Miami at No. 3 was the danger spot. The Dolphins traded up from No. 12, switching spots with the Raiders. they probably did the Eagles a favor because first-year head coach Chip Kelly was enamored with DE Dion Jordan, a player he had coached at Oregon.

The Dolphins took him, though, leaving Johnson for the Eagles.

Six more offensive linemen were drafted after Fisher, Joekel, and Johnson, for a total of nine.

Only Johnson and Justin Pugh remain in the league. Pugh was taken 19th overall by the Giants, but is on his second team, playing guard with the Cardinals now.

“I’m one of the few left standing,” said Johnson. “It feels good. The NFL’s a crazy process. You see guys come in and out. I’m just fortunate to be in a place for a long time.”

Ed Kracz is the publisher of SI.com’s Fan Nation Eagles Today and co-host of the Eagles Unfiltered Podcast. Check out the latest Eagles news at www.SI.com/NFL/Eagles or www.eaglesmaven.com and please follow him on Twitter: @kracze.