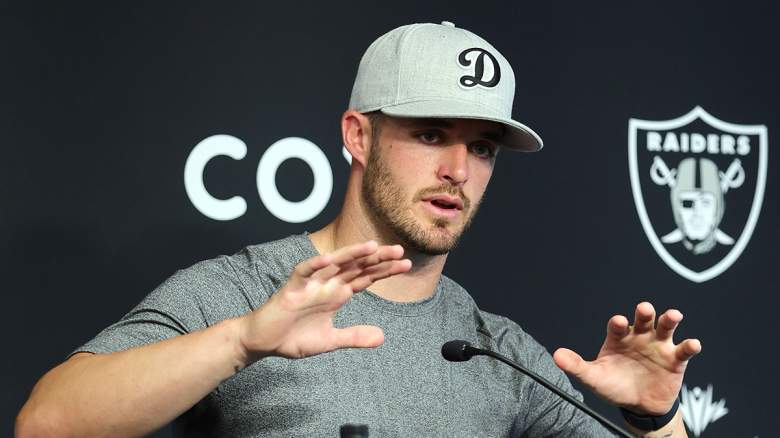 A good chunk of time has passed since the Las Vegas Raiders brought in Colin Kaepernick for a workout and the quarterback remains unsigned. It’s unlikely the team worked him out as some sort of public relations ploy as they have been very quiet about the matter. In fact, nobody from the organization has said much of anything.

Now that the dust has settled from the initial news, it’s easier for players to address the workout. The person whose opinion matters most is quarterback Derek Carr. If Kaepernick was signed, he’d be backing up the veteran. While Kaepernick can be a polarizing figure around some circles, Carr has no issue with the former San Francisco 49ers starter.

The two played against each other in college and the NFL. Carr was vocal in his support for Kaepernick in the past and made it clear that he would have no problem if the Raiders signed him.

“Well, I know Colin,” Carr told the media after Tuesday’s practice. “I’ve known Colin since our days playing in the WAC conference, which is no longer a thing. My gray hairs may start to make a point for that. I remember our days back then, just watching him and what he did in college and getting to know him and talking to him on the phone and things like that.

“I’ve loved my time with him. I think he’s a great guy. He’s been great to be around him. I’ve enjoyed being around him, talking with him, competing against him. Josh [McDaniels] told him they were doing it and all that kind of stuff. I literally said the same thing I’m telling you: I was like, ‘I’ve enjoyed my time around him. I love him. Him and I would get along great.’ My brother [David] knew him a little bit from San Francisco. He’s like, ‘I love Colin. He’s awesome.’ I think Colin would just have to answer more questions than all of us would have to: ‘Why hasn’t it happened? Why this? Why that?’ But for me, it would have been just fine. I enjoyed my time with him.”

ALL the latest Raiders news straight to your inbox! Subscribe to the Heavy on Raiders newsletter here!

Carr Says Kaepernick Would Fit in With Raiders

Though Kaepernick has been out of the NFL since the end of the 2016 season, he’s still a controversial topic for many due to his stance on protesting the National Anthem to bring awareness to police brutality. There could still be players and coaches around the NFL who want nothing to do with him. Carr doesn’t believe that would be the case with the Raiders.

“For us, I think it’d be great,” Carr said of Kaepernick’s fit in the locker room. “I don’t want to speak for everybody. … I know him and I would get along great. I know we have in the past, and I think we would again. I think, for the most part, I think he’d get along just fine with our guys.”

When asked about Kaepernick, Carr could’ve taken the easy way out and simply said that he’s only interested in talking about players on the team right now. That’s the route head coach Josh McDaniels went and so did many other players. Carr is in a unique situation because he knows Kaepernick better than most in the organization.

With owner Mark Davis and Carr offering strong support for the quarterback, it would be easy for the Raiders to sign him. There would be some blowback from a small portion of the fan base but that shouldn’t matter to the coaching staff if they think Kaepernick is superior to the other backup quarterbacks currently on the roster.