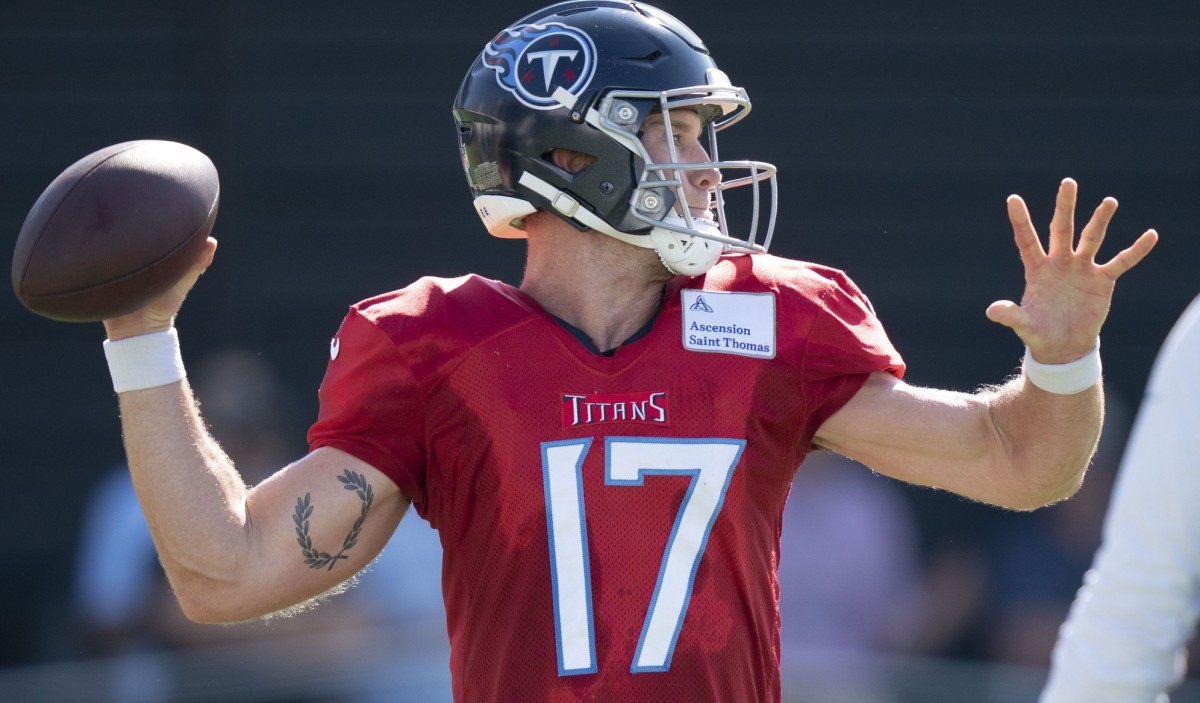 NASHVILLE – One of the benefits of practicing against another team during training camp is simply seeing different things.

Such was the case for the Tennessee Titans on Wednesday at Ascension Saint Thomas Sports Park, as they practiced with the Arizona Cardinals – competing in one-on-one and two-on-two-drills, seven-on-seven drills and two-minute drills.

The bad news: Things didn’t always go particularly well for the offense. Receivers had difficulty getting consistent separation in the one-on-ones and two-on-twos near the goalline, and – probably more significantly – the offense sputtered during two-minute drills.

But it’s also worth noting that – unlike a regular-season game situation – the Titans did no specific preparation for the practice versus the Cardinals.

“We didn’t come out with a full plan against all the looks Arizona was going to throw at us,” quarterback Ryan Tannehill said. “It’s an aggressive coordinator (Vance Joseph), an aggressive defense, and threw a lot of bunch of different looks at us.

“We knew we were probably going to get a bunch of crazy looks. We didn’t know exactly what they were going to be. They ended up (being) things that you don’t see too often in the NFL. But it’s good work for us, a lot of looks we can learn from.

“We’re going to play other teams that have pressure packages and personnel packages, where they’re moving guys around … We’re going to have to identify those and block them when we get those opportunities.”

Here is a more specific breakdown of the Titans’ offense on Wednesday:

Overall, Titans receivers had their share of difficulties getting free of Cardinals defensive backs in these drills, all of which came near the goal line. Tannehill and Logan Woodside alternated reps at quarterback, with Malik Willis doing work elsewhere.

“They played aggressive in the one-on-one period and two-on-two period, a lot of contact,” Tannehill said. “There were a lot of contested catches. But that’s the way it’s going to be, especially down low in the red zone. They’re not going to call that contact. So as we see routes as an offense, we have to be able to play through that contact and make a tough catch with somebody on your back.”

Specifically, it looked as if Robert Woods was tied up on a few of his reps. He did get clear during a two-on-two play, catching a Tannehill pass in the back of the end zone. But that play was negated after Nick Westbrook-Ikhine was flagged for offensive pass interference.

Treylon Burks didn’t get a lot of targets. Woodside and Tannehill each overshot the first-round draft pick.

Kyle Philips had two of the better plays among the wide receivers. On one of the one-on-ones, he beat Cardinals cornerback Christian Matthew to the back of the end zone and hauled in a Tannehill pass. On a two-on-two play, he beat safety Jalen Thompson to the front-corner pylon and caught a Tannehill pass. But Cardinals safety Budda Baker was too good during a two-on-two drill later, as he beat Philips to that same near pylon and knocked a pass away.

Racey McMath had some highlights and lowlights during the drills. It looked like he miscommunicated with Tannehll on one incompletion, but then executed smoothly with Tannehill a few plays later, beating cornerback Byron Murphy and catching a touchdown near the sideline. A few plays after that, Logan Woodside hit McMath high for what should have been a touchdown pass, but McMath couldn’t hold on to the pass.

“Down here in the red zone, I think the one-on-ones, it’s the same stuff, and we just have to realize it’s going to be contested,” Titans coach Mike Vrabel said. “There’s going to be contact and we have to do a better job of attacking the football and keeping guys off of us. That’s the way it’s going to be. It’s tight. It’s quick.”

The offense looked much sharper in the 7-on-7 drills.

Willis had a couple of good sets of reps against the Cardinals, as he went seven-for-seven, highlighted by a shot to tight end David Wells over the middle. But the highlight pass was from Tannehill, who connected on a seam pass to rookie tight end Chig Okonkwo, threading the ball into a tight window.

When the Titans went 7-on-7 against their own defense, Willis showed off his powerful right arm, firing a long completion down the left side of the field to Mason Kinsey. The downside, though, is that Willis held the ball for several seconds before the throw, so in a true game situation, he might not have had the opportunity to make the pass.

Though the overall performance for the offense was good in 7-on-7, there were a few miscues in the team drills. Rookie right tackle Nicholas Petit-Frere, who once again got a lot of snaps high in the rotation, was flagged for a false start on one play. On another play, Westbrook-Ikhine caught a pass from Tannehill, but had the ball knocked free by Chance Campbell. Willis mishandled a snap as well.

One note on the team drills: Burks was out there for very few of the plays, if he was out there at all. He definitely did not take part in any of the two-minute drills later in the day.

One other note regarding team drills: Running back Derrick Henry participated in team drills for the first time since early in camp. Vrabel said Henry might see more team-drill action tomorrow, perhaps a sign that he’s ramping up toward the season opener.

The Titans’ offense sputtered more often than not in the two-minute drills against the Cardinals.

Tannehill’s first drive featured a few check-downs and short completions, but it ultimately fizzled out when his long attempt over the middle to Philips was incomplete. Philips got his hands on the ball, but a thudding hit by Jalen Thompson knocked it loose.

Willis’ first drive came to a quick end when his throw for Mason Kinsey over the middle was intercepted by Tae Daley. It would have been a pick-six situation in a real game.

On Tannehill’s next drive, the offense looked a bit better, despite a false start penalty on Westbrook-Ikhine. But the drive ended in an interception as well. Tannehill tried to find McMath in the back of the end zone, but Murphy jumped up and snared the ball before it arrived.

On Willis’ second drive, the Titans turned the ball over on downs. Willis threw the ball away on fourth down, losing track of the down situation.

“Yeah, lots to work on,” Titans tight end Austin Hooper said. “It’s training camp. Lot of work (to do) on some communication things.

“But that’s the beauty of coming out here and doing it against different people. You get to see where you’re at, see where your communication is at and your execution is at. So we’ve just got to go to the drawing board and get better.”

Kicker Randy Bullock continued what’s been a very good training camp when he connected on seven-of-eight field-goal attempts. Bullock hit from 33, 36, 41, 42, 51, 33 and 33 yards. His only miss was from 48 yards, when he was wide right.

Rookie punter Ryan Stonehouse served as the holder for all of Bullock’s field-goal attempts.