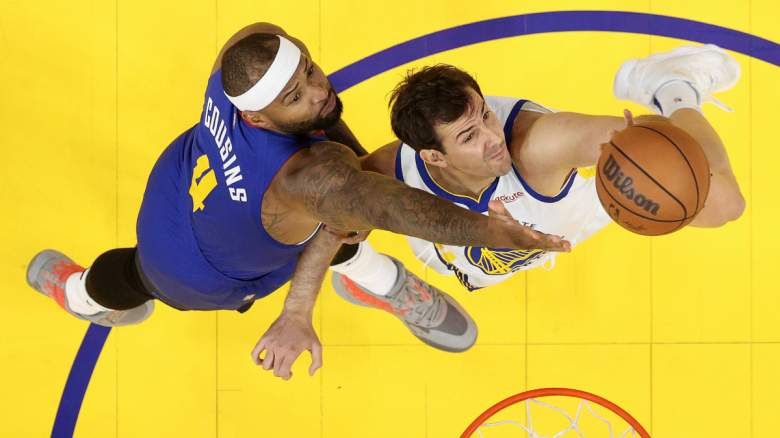 DeMarcus Cousins and Nemanja Bjelica battle for a rebound during a playoff game between the Denver Nuggets and the Golden State Warriors.

Ever since word of Kevin Durant’s desire to bolt from Brooklyn dropped during the first 24 hours of NBA free agency, the hoops world has been in a tizzy about a potential reunion with the Golden State Warriors.

Sure, the Phoenix Suns are the odds-on favorite to land KD — and the Miami Heat & Toronto Raptors are in on the action, too — but the very possibility of a return has nonetheless captured the imagination of the masses. And during an appearance on KNBR, ESPN’s Marc Spears indicated that the Dubs had even put a call in to the Nets about the former Bay Area fave.

There’s a chance, though, that Durant isn’t the multi-time All-Star that Dub Nation and the hoops blogosphere at large should be focused on with their reunion fantasies.

After all, footage of another ex-Warrior —  unrestricted free agent DeMarcus Cousins — working out with Draymond Green has been making the rounds on social media.

On Saturday, Clip Jones/@stillcountincash on Instagram updated their story with a video showing Green and Cousins getting shots up together during a workout. It’s unclear when the footage was taken, but it does appear to be recent.

While old teammates and/or players from different squads honing their craft together during the offseason is hardly a rare occurrence, a number of fans were taken by the very sight of Boogie and Dray sharing the court.

Perhaps it’s because Cousins is also a four-time All-Star who last resembled his best self in Golden State. Or maybe it’s because the Warriors currently have just Kevon Looney and the oft-injured, barely-tested James Wiseman manning the pivot. Whatever the case may be, fans are already commenting about a renewed partnership.

“If we could somehow get boogie that would be fire,” tweeted one fan.

“@boogiecousins get to the dubs!!!!! With you we’ll all get a chip!” implored another commenter.

“Let’s goo I’d love to have him back,” declared a third tweeter. “He a big body.”

Coach Kerr Still Has a Fondness for Boogie

The 31-year-old Cousins split the 2021-22 campaign with the Milwaukee Bucks and Denver Nuggets, but he was playing important minutes for the latter team during its first-round series against the eventual-champion Warriors in April.

In the wake of that matchup, Warriors coach Steve Kerr made a point to shout out the baller, who played 30 games with Golden State during the 2018-19 campaign.

“I also want to just mention how happy I am for DeMarcus Cousins,” Kerr said following his club’s series-clinching win, via NBC Sports Bay Area. “That guy put his heart on the line for us several years ago and he’s been through hell; torn Achilles, torn ACL. He’s a great guy, he was a great teammate here.”